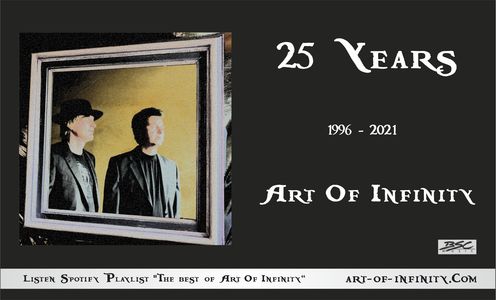 In October 1996, Thorsten Sudler-Mainz and Thorsten Rentsch travelled to a house on the Dutch coast. In their luggage they were carrying a selection of instruments and the vision of a new and unique project called ART OF INFINITY.

This was the foundation for the debut album New Horizon, released in 2000, before ART OF INFINITY signed a record deal with BSC Music GmbH in 2004. The second ART OF INFINITY album Dimension Universe as well as the two follow-up albums Endless Future (2008) and Raumwerk (2012) were released on the BSC main label Prudence.

Together with many top-class guest musicians, the duo created a body of work in the field of German ambient and art rock that still resonates today. In 2012, ART OF INFINITY played a live concert at the Planetarium Bochum/Germany, which was the band's last activity to date.

While Thorsten Rentsch was subsequently more concerned with the work in his Renaissance Studio Cologne, Thorsten Sudler-Mainz transferred parts of the successful concept of ART OF INFINITY to his solo project DEEP IMAGINATION and released his most successful album to date with the current album "My Silent Celebration" in 2020.

October 2021 marks the 25th anniversary of ART OF INFINITY's founding. Whether ART OF INFINITY is finished or will be reactivated at some point is something the two founders leave open.

Spotify playlist The best of ART OF INFINITY