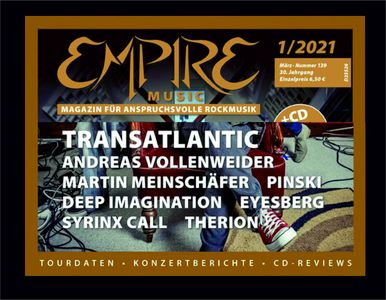 DEEP IMAGINATION mastermind Thorsten Sudler-Mainz talks about the 80s, ART OF INFINITY and his new album. (04.03.2021)

EMPIRE is a German print magazine for sophisticated rock music. It was founded in 1991 and covers topics around Artrock, Progressive Rock and Electronic Music five times a year. After DEEP IMAGINATION was featured in the last issue on the supplement CD sampler "EMPIRE Art Rock 138" with the longtrack "Burning Sun" from the new album "My Silent Celebration", an extensive interview with DEEP IMAGINATION mastermind Thorsten Sudler-Mainz has now been published in issue 1/2021. In the interview, which was conducted by Stephan Schelle, the German musician talks about his beginnings in the 80s, his successful project ART OF INFINITY in the noughties and the making of DEEP IMAGINATION's highly acclaimed new album.